A unique experiment with animals in the jungle built mirror (Video)

A unique experiment with animals in the jungle built mirror (Video) 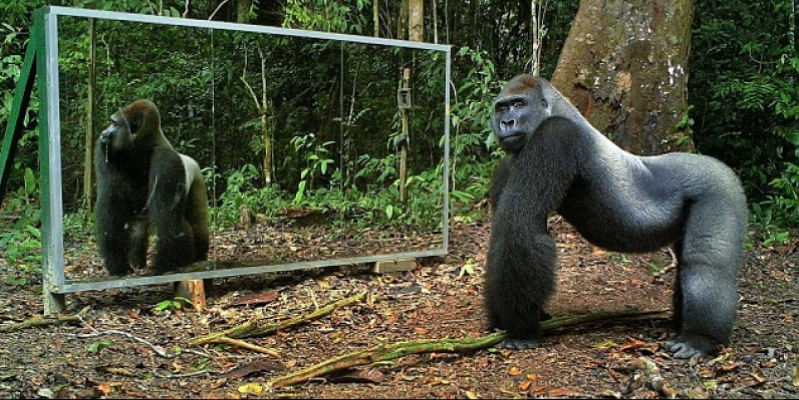 For the first time in his own image in the mirror seeing domestic cats usually ignore it, some dogs bark it. Meanwhile, wild animals ... Wild animals behave much more interesting than the domestic. French photographer Xavier Hubert Brierre by a simple experiment that gave extraordinary results - Gabon jungle built a huge mirror and filmed as it more precisely, to its mirror image reacts unexpectedly from seeing wild animals. The results surpassed expectations.

It turns out, mirrors indifferent jungle mammals probably not. Some of the beasts (eg., Gorillas) mirror aggressively attacked others - lovingly played with it a visible image (leopards), others - frightened, fourth - curiously watched what is there so perfectly mimics all the steps (chimpanzees).

All the animals reactions to his own image in a mirror photographer filmed hidden camera, activated by motion sensors, when the animal appeared near a mirror or a group.

Animal reactions are really amazing and unexpected. That's great apes gorilla instead curiously examination of aggressively attacking the mirror and observed defiantly not retreating competitor. Meanwhile predator leopard contrary - grunting as they gently pad paw, as if trying to depict their "beat five. The next victim of the mirror above the leopard jumped out too playful mood, more than militant.

Quite unlike gorillas in his own image, has responded chimpanzees. Their reaction dominated curiosity. Monkeys originally researched and curiously watched your images, and then some of them started even perk. No less interesting and the fact that chimpanzees later returned to the mirror and struggled against him prim - even when there was no mirror.

Mirror in the jungle and came upon even an elephant. However, he briefly glanced at himself, shortly indifferent nupėdino away.