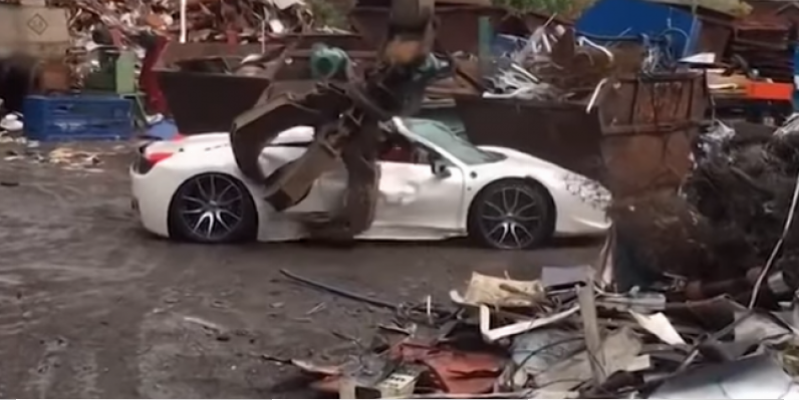 In Britain, the Ferrari 458 Spider, confiscated from Millionaire Zahido Khan (31), was destroyed by a police dump in the landfill. The former owner of the car distributed this breathtaking video shot from the officials, distributed on social networks. According to him, the police made mischief and caused damage for 200 thousand. euro

The story began when Zahid Khan arrived at the Birmingham Court for renting things and built a luxury car at a pedestrian walkway instead of a carriageway. So he and the luxury car became famous. But not for long.

Last April 5 Millionaire stopped by the police and after checking the documents, Ferrari was seized. Suspected that the car was stolen and did not have the required insurance. Meanwhile, expensive car collector Zahid has argued that Ferrari has been legally auctioned (through brokers) and is legally owned by its owner.

Unfortunately, when Zahid arrived at the police with all the necessary documents, he heard a sad message - the Ferrari 458 Spider was destroyed because, according to officials, it belonged to category B (inappropriate for traffic due to an accident or other causes).

And although the owner of the car argued that the car had not been stolen that it would be profitable to sell in parts at worst, it was too late.