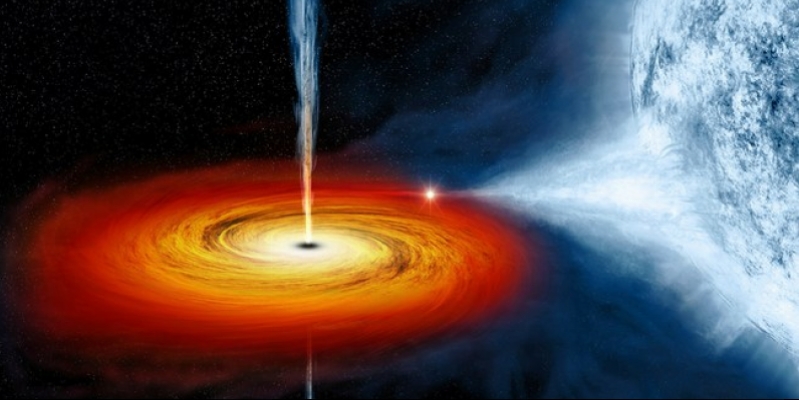 Black hole known for his gluttony - they can suck up entire stars and even galaxies tear. However, this feeding their surrounding material is not always easy. Last week, astronomers announced from the beginning to the end of several months of watching black hole devouring a star, writes nbcnews.com.

In addition, for the first time in history they observed plasma jet at the event horizon. All his observations, scientists described a peer-reviewed journal Science.

"Our result - the first in the history of the light curve observation within 30 days of active case" - briefly outlined his study at Johns Hopkins University scientist Sjoertas van Velzen, work was carried out together with colleagues.

"This is the first time you've seen everything from the stars of destruction, followed by the black abyss has been stretched in a cone-shaped discharge, also called jet. We have seen how this process develops over several months, "- said astronomer.

Sucked into a black abyss of a star was about the size of our Solar. It devoured ASASSN 14li-called black hole for the first time at Ohio State University scientists observed 2014. Mr van Velzen with colleagues quickly to tip them available to the radio, X-ray and optical telescopes in the range of newfound cosmic drama, the image we have reached 300 million. years after the event.

Previous observations of black holes feeding was started a year after the start of the feeding process. And in this case, the researchers were quickly enough to capture flash - plasma burst spat immediately after the star crossed the black hole event horizon limit.

Black precipice of destruction carried out in the stars are wonderfully complex - we are very far from understanding this process. In all previous cases, attempting to capture these bursts, scientists, myself included, late ", - he said in a statement Mr van Velzen.

Astronomers believe that supermassive black holes that hides almost all the centers of galaxies - as well as ours, the Milky Way galaxy in the middle. Their strong gravity adds too came near objects. However, the "sucks" the objects from a distance. In addition, black holes often draw the gas and dust from its immediate environment.

Black holes gravity is so strong that even light includes - for the direct observation of these objects is not possible. However, such holes swallowing matter, this time in singing his last song, exhilarating upswings light, radio waves, or plasma burst, which is able to overcome the black hole gravity.